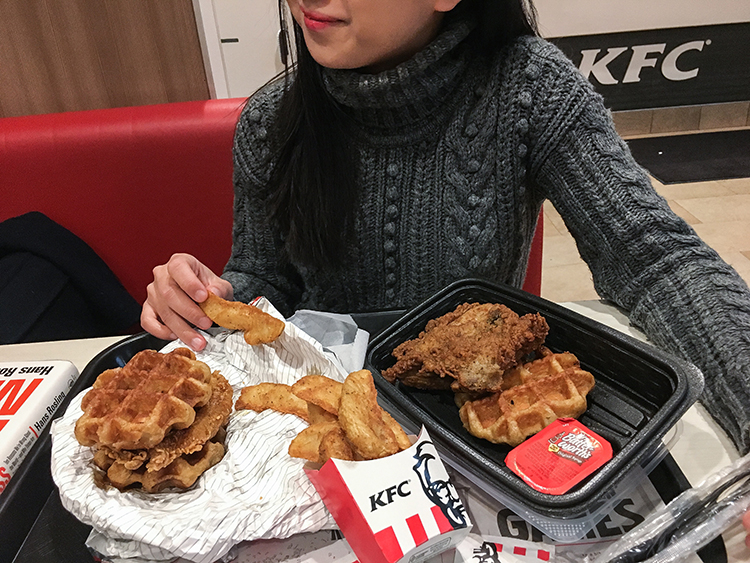 ♥ KFC added chicken and waffles to its menu last month, and I would be remiss if I didn’t try it–seeing as this addition was effectively tailored to me. Sadly I found it kind of lacking: The waffles are chewy and cloyingly sweet–not terrible by any means, but not great, either.

♥  The Strange Brands in Your Instagram Feed (The Atlantic): “Shopify serves as the base layer for an emerging ecosystem that solders digital advertising through Facebook onto the world of Asian manufacturers and wholesalers who rep their companies on Alibaba and its foreigner-friendly counterpart, AliExpress. It’s a fascinating new retail world, a mutation of globalized capitalism that’s been growing in the cracks of mainstream commerce … The products don’t matter to the system.”

♥ How Extreme Weather Is Shrinking the Planet (The New Yorker): “… already, even in the most affluent areas, many of us hesitate to walk across a grassy meadow because of the proliferation of ticks bearing Lyme disease which have come with the hot weather; we have found ourselves unable to swim off beaches, because jellyfish, which thrive as warming seas kill off other marine life, have taken over the water. The planet’s diameter will remain eight thousand miles, and its surface will still cover two hundred million square miles. But the earth, for humans, has begun to shrink, under our feet and in our minds … Each year, another twenty-four thousand people abandon Vietnam’s sublimely fertile Mekong Delta as crop fields are polluted with salt. As sea ice melts along the Alaskan coast, there is nothing to protect towns, cities, and native villages from the waves … Thirty years ago, some believed that warmer temperatures would expand the field of play, turning the Arctic into the new Midwest … But there is no rich topsoil in the far North; instead, the ground is underlaid with permafrost, which can be found beneath a fifth of the Northern Hemisphere.”

♥ For those who are gift-shopping, Anthropologie is running a one-day, 25% off sale on “monogram gifts”; the discount will be taken in cart.

♥  The Hot New Trend in Luxury Retail? Not Selling Anything (Fashionista): “Unlike the many ephemeral retail concepts that came before them, the main goal here is not to sell you stuff. These brands are investing in physical spaces and events without any expectation that they will see a return on that investment — at least not a return that can be measured in dollars … For most of these events, the metric of success is engagement.”

♥  What Am I if Not Employed? (The New York Times): “… it’s nearly impossible to have a demanding job and have balance. The word is a setup; it serves only to make you feel badly when you realize you can’t ‘have it all’ … life is about choices and chapters.”

♥  Your Puffy Coat Is Too Puffy (The Wall Street Journal): “Since the amount of insulation does roughly relate to how warm a jacket is, in most cases an extravagantly inflated puffer constitutes overkill … Bigger is not necessarily always better, especially when most spaces are vigorously heated throughout winter … Puffiness also hinders mobility and scope for styling.”

♥ Dozens of men’s socks at J. Crew are on promotion for 50% off, an offer that can be stacked with the extra 48% off code (48HOURS). Despite their predictability, socks make for great holiday gifts.

♥  The Over-celebration of Life Events (The Atlantic): “… America’s young adults are celebrating so much because they’re accustomed to packaging the events of their life into narratives for their virtual networks … When so much socializing happens online, it may be that any excuse to gather loved ones under a single roof is more appealing than ever … When your peers’ free time seems ever-shrinking, inviting friends over to hang out just because can feel like an imposition.”

♥  Apple and Fast Food Have the Same Problem (Bloomberg): “In some cases, businesses must charge higher prices to offset rising labor costs, or climbing bills for iPhone parts. But shoppers simply don’t have endless capacity to keep paying more for their favorite stuff … In the case of both Apple and many restaurant chains, the reason for the difficulty in attracting more customers is similar, and it’s one that’s hard to combat: Saturation.”

♥ Select items (including accessories, some of which make for good gifts) are currently 30% off at Boden with code U1H4. I recently ordered the well-reviewed Agnes Fair Isle Dress and Alexis Jersey Dress.

♥  The Problem with Invisible Branding (Fast Company): “The key obstacle that AI faces, from a branding perspective, is that it has been engineered to be invisible … So how should companies brand AI? For some companies, it could mean embodying AI-generated experiences in unique personalities … For others, it might mean actively marking AI-enhanced experiences as such so that a consumer understands their behavior and benefit … For still other companies, perhaps branding is a matter of empowering people to be active participants in the machine learning used to train AI systems.”

♥  A Generation of Widows, Raising Children Who Will Be Forged by Loss (The New York Times): “The war in Afghanistan is disproportionately killing young men, and it is leaving behind a generation defined by that loss … A new widow often must rely completely on her husband’s family, which is likely to demand that she marry the next available brother or cousin. The women usually have little say.”

♥  Tech Companies Aren’t the Only Ones Competing for Tech Workers (The Wall Street Journal): “Allstate, for instance, posted more than a dozen jobs related to autonomous-vehicle technology in the 12 months ended in June … as self-driving cars move closer to reality, the insurer has a huge stake in understanding their safety and financial-risk implications … as it builds insurance products around them. To do so, its researchers need computer-vision, engineering and other driverless-car expertise.”

♥  More Than a Third of Female Suicides Are Committed by Indian Women (Scientific American): “… in 2016 [suicides committed by Indian women] accounted for more than 36 percent of female suicide deaths globally, despite making up less than 18 percent of the world’s female population. Suicide is the leading cause of death among Indian women ages 15 to 29, responsible for about 26 to 33 deaths per 100,000 women in that range.”

♥ A Business With No End (The New York Times): “Still harder for me to grasp was the total interpenetration of e-commerce and physical space. Standing inside Stevens Books was like being on a stage set for Stevens Books, Stevens Book, Stevens Book Shop, and Stevensbook — all at the same time. It wasn’t that the bookstore wasn’t real, but rather that it felt reverse-engineered by an online business, or a series of them. Being a human who resides in physical space, my perceptual abilities were overwhelmed. But in some way, even if it was impossible to articulate, I knew that some kind of intersection of Olivet University, Gratia Community Church, IBPort, the Newsweek Media Group, and someone named Stevens was right there with me, among the fidget spinners, in an otherwise unremarkable store in San Francisco.”

♥  The Paradox of “No Makeup” Makeup (Vox): “… when the goal of a tutorial is producing a result so subtle it can’t be detected, the importance is the process and the motivation behind the look more than any visual change … it’s a claim of subverting beauty ideals that doesn’t actually subvert anything; both the ritual and the consumption of beauty are maintained.”

♥ Fast Fashion: ‘How Do You Justify Selling a £2 T-shirt?’ (BBC): “… Carol Kane, joint CEO of online fashion house Boohoo, was asked how the company could sell dresses for as little as £5 when the minimum wage was £7.83. She said this only applied to a small number of dresses intentionally sold at a loss, to drive more traffic to the site.”

♥ There are a few Heattech styles on sale at Uniqlo this week (promo is online only), just in time for a dramatic temperature drop. I picked up several styles as gifts for a friend who recently moved back east from sunny southern California.

♥ A Winter-Coat Heavyweight Gives Trump’s Trade War the Cold Shoulder (The New York Times): “Columbia Sportswear … has long protected its outdoor gear from the whims of Washington by engaging in what the company calls ‘tariff engineering’ … Today, just under 40 percent of Columbia’s business is outside the United States, and all of its products are made abroad.”

♥ Retailers Are Testing Facebook-Style Shopper Profiles (Business of Fashion): “Consumers are fickle creatures and abandon brands for any number of reasons, from late deliveries to damaged merchandise. Aware that one bad experience can turn a shopper against them forever, retailers are spending hundreds of millions of dollars to improve service and keep customers loyal … Some are testing new ‘Customer 360’ software from Salesforce.com and upstart rival Freshworks that lets them build a Facebook-style profile of each shopper, the better to understand what they want and how to keep them happy and clicking ‘pay’ … The idea is to bring together on one dashboard data from the traditionally siloed marketing, help-desk and sales departments, making it possible to build a Facebook-style profile of each shopper.”