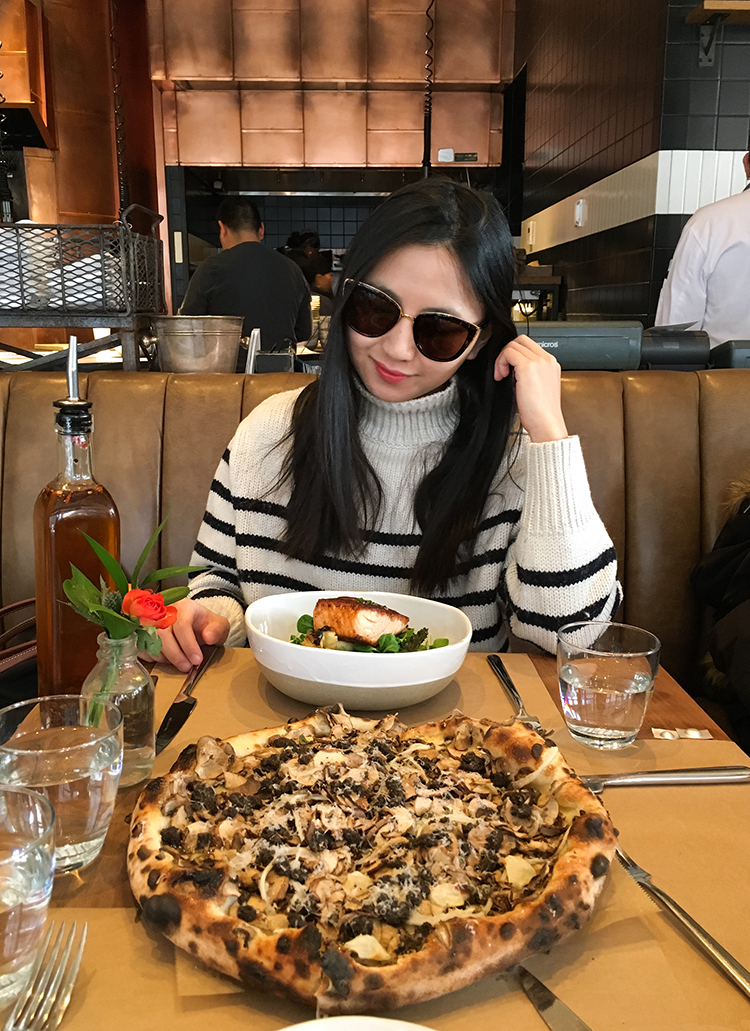 Wearing my lone Black Friday “in-store” purchase, because why brave the crowds when the deals online are just as good?

♥ A Black Friday shopping recap: I picked up Herschel Supply Co. suitcases and Arc’teryx coats for my parents (the Patera Down Parka for my mom and the Magnus Coat for my dad), limited-edition PS4 games for my brother (sweetened by the targeted American Express x Amazon deal), a subscription of Tropicana Apple Juice for myself (a sale so good it made the front page of Slickdeals), a Roomba for my grandma, and miscellaneous clothing items for myself that I mentioned throughout the week in the pre-BF and BF sale posts.

♥ My plan for Cyber Monday: shop the J. Crew extra 60% off sale and the Shopbop extra 30% off sale… and spend the rest of my holiday shopping budget on Cheesecake Factory gift cards (for every $25 in gift card purchased, get two free cake certificates), which as always is my favorite deal.

♥  J.Crew Must Die to Live (Business of Fashion): “Boredom is the death knell for a brand, and anyone can see that consumers are bored of J.Crew.”

♥  The Great Promise of China (The New York Times): “… although Chinese customers now are responsible for 32 percent of luxury goods sales worldwide, that number is still expected to grow to 40 percent by 2024 and power 75 percent growth of the global market … more than 50 percent of luxury customers now lived in second- and third-tier cities like Tianjin and Dalian, bolstering the importance of online platforms as there are few premium malls in those locations.”

♥ Black Friday’s Handbag War Descends on Manhattan (Bloomberg): “Handbags represent a $7 billion segment of the U.S. fashion accessories industry, but they’ve been on the decline, down 8 percent in 2017 over the year prior … The Kors store is full of bright red signage declaring 50-percent-off ‘doorbuster’ deals. Coach’s black signs promise either 30 or 50 percent-off merchandise.”

♥ How Podcasts Became a Seductive—and Sometimes Slippery—Mode of Storytelling (The New Yorker): “Podcasting is a peculiarly intimate medium. Usually transmitted through headphones to a solitary listener, or played over the car stereo during a commute, an audio narrative can be immersive in a way that a radio playing in the background in a kitchen rarely is. Podcasts are designed to take up time, rather than to be checked, scanned, and rushed through: they are for those moments when you can’t be scrolling on your phone. For a digital medium, podcasts are unusual in their commitment to a slow build, and to a sensual atmosphere.”

♥ Victoria’s Secret Is Trying to Change With the Times. Or Is It? (The New York Times): “But its essential vocabulary — its approach to the world — is still dedicated to an idea of sexy rooted in the pinup era, when women and their bodies were defined by the eye and imagination of a male beholder; when they were at the mercy of the moguls … And that era is on its way to extinction.”

♥ When Families Un-Adopt a Child (The Atlantic): “Accurate statistics are not available for how commonplace second adoptions are, due to a wide variety of factors that include the closed nature of some adoptions, changed names on Social Security cards and birth certificates, and other paperwork issues. But the U.S. Department of Health and Human Services estimates that of the approximately 135,000 adoptions finalized every year in the U.S., between 1 and 5 percent of them end up being legally dissolved.”

♥  The Future of Fashion in One Word: Plastics (Wired): “Sustainability marketing obviously earns brands street cred. What’s harder to understand is exactly what impact these measures have on the planet. When they go through the washing machine, clothes made from recycled plastics may still shed microplastics that end up in the ocean. Plus … sustainability initiatives should think not just about how to recycle bottles into clothes, but how to recycle those clothes into something else, allowing the plastic to live many lives before it ends up in a landfill.”

♥ ‘I Don’t Really Want to Work for Facebook.’ So Say Some Computer Science Students. (The New York Times): “As Facebook has been rocked by scandal after scandal, some young engineers are souring on the company. Many are still taking jobs there, but those who do are doing it a little more quietly … while many of the big tech companies have been hit by a change in public perception, Facebook seems uniquely tarred among young workers.”

♥ Beauty and the Backlash: Disney’s Modern Princess Problem (The Wall Street Journal): “How do you keep princesses relevant without alienating fans who hold fast to the versions they grew up with? Billions of dollars of revenue—dolls, sequels, stage shows and dresses—hang on getting that balance right … Disney develops and manages characters such as Mulan or Rapunzel similar to the way Apple Inc. handles new iPhone models, with a secretive process that allows the princesses to debut in public fully formed …Hundred-page manifestos outlining the colors, language and attitude that licensees and designers should use for each princess are treated as gospel … Animators must draw princesses’ eyes looking in different directions when they appear on the same lunch box or poster. That’s because the princesses are not to live in the same imagined universe, even if they’re adjacent to each other in the physical world.”

♥  I Found the Best Burger Place in America. And Then I Killed It. (Thrillist): “If there was one main negative takeaway from the raging fires of food tourist culture and the lists fanning the flames, it was that the people crowding the restaurant were one time customers. They were there to check off a thing on a list, and put it on Instagram. They weren’t invested in the restaurant’s success, but instead in having a public facing opinion of a well known place. In other words, they had nothing to lose except money and the restaurant had nothing to gain except money, and that made the entire situation feel both precarious and a little gross.”

♥ This City’s Overdose Deaths Have Plunged. Can Others Learn From It? (The New York Times): “Medicaid expansion hugely increased access to treatment … carfentanil’s presence was fading — maybe in part because traffickers realized how much of their customer base it was killing … The news is not all good. Cocaine and particularly meth use is rising fast in the Dayton area, as it is nationwide.”

♥  Custom Photo Filters Are the New Instagram Gold Mine (The Atlantic): “Business is good. Presets are ‘about the people selling the filters rather than the filters themselves,’ … Like wearing a top from your favorite YouTuber’s custom–T-shirt line, using a preset can help you feel like you’re living your idol’s lifestyle. Your photos inherently look more like hers, and it makes you feel like you’re part of a larger fan group.”

♥  The Challenges of Japan’s Demography (The Economist): “Abe’s government … is encouraging more women (who have tended to drop out of jobs when they have babies) and more old people to work. Also, Japan’s parliament is debating a bill to allow thousands of blue-collar immigrants into the country … Only 2% of the workforce is foreign compared with 17% in America. The government has also mooted ideas including raising the retirement age and deferring the age when pensions can be drawn.”

♥ The Science Is Clear: Dirty Farm Water Is Making Us Sick (Wired): “Growers aren’t required to test their irrigation water for pathogens such as E. coli. As a result, contaminated water can end up on fruits and vegetables … Congress in 2011 ordered a fix, and produce growers this year would have begun testing their water under rules crafted by the Obama administration’s Food and Drug Administration. But six months before people were sickened by the contaminated romaine, President Donald Trump’s FDA – responding to pressure from the farm industry and Trump’s order to eliminate regulations – shelved the water-testing rules for at least four years.”

♥  The Myth of Authenticity Is Killing Tex-Mex (Eater): “The standard narrative about Tex-Mex is that it’s an inauthentic, unartful, cheese-covered fusion, the kind of eating meant to be paired with unhealthy amounts of alcohol or to cure the effects thereof … Those assumptions are entirely wrong. Not only are they incorrect — they were promulgated by elite white food writers … Tex-Mex is comfort food, and people don’t want their comfort food to change. At the same time, not everything, not even the combination plate, can endure. People want healthier, lighter restaurant meals, no one wants processed food, and family restaurants can’t last forever.”

♥  The Price of Cool: A Teenager, a Juul and Nicotine Addiction (The New York Times): “According to the 2018 National Youth Tobacco Survey, released this week, the number of middle and high school students who currently vape has soared to about 3.6 million … Juul … now accounts for more than 70 percent of the e-cigarette sales in the United States.”