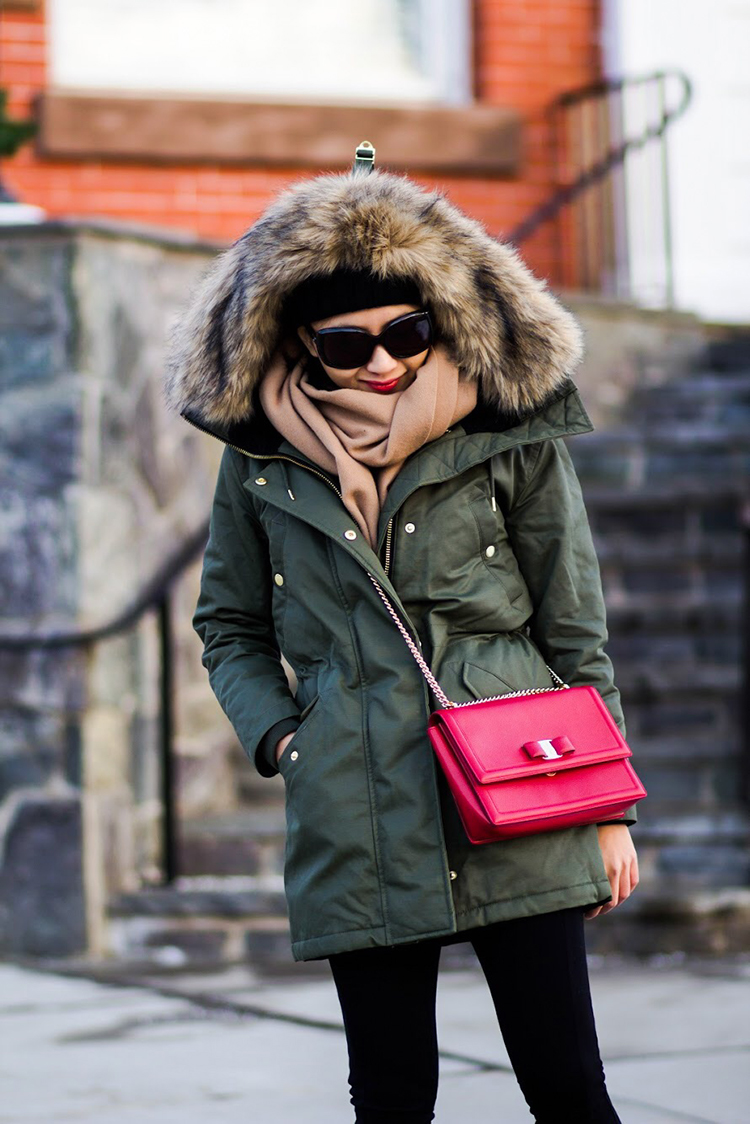 ♥ The “Perfect Winter Parka” I reviewed last year is now 40% off online in five colors with code BOO. And if you sign up for J.Crew’s email list (use a previously unused email address), you will receive a 15% off unique code (by email) that can be stacked on top of the current promotion.

♥  Measuring the Fashion World (McKinsey & Company): “… apparel executives are well aware of the need for transformation. The executives surveyed for the 2016 and 2017 reports identified ‘value chain improvement and digitization’ as two of their top challenges … speed to market was identified as the top priority by most of the fashion executives … vertically integrated players have a distinct advantage in the product-creation and design-and-development phase. On average, these players take only 11 weeks to complete this phase, whereas hybrid players take an average of 24 weeks … the midmarket segment has an overall go-to-market time of 32 weeks, value and discount companies have an average go-to-market time of only 27 weeks.”

♥  Everything You Wear Is Athleisure (The Atlantic): “… athleisure is the culmination of three long-term trends. First, technological improvements to synthetic fiber have made products like spandex more flexible, durable, and washable than natural materials. Second, the modern fixation on healthy appearance has made yoga pants an effective vector for ‘conspicuous consumption,’ … Finally, the blurring of yoga-studio fashion and office attire snaps into the long decline of formality in American fashion.”

♥ For Prada, Success in the Bag (Business of Fashion): “… four years ago, Prada had effectively no handbags priced at or below €499; whereas, today, this entry segment accounts for 1 percent of its total offering. The group has also expanded the proportion of its bags in the €500 to €999 price range from 13 percent to 18 percent … nylon was reintroduced and pushed more aggressively, such that leather fell from 92 percent to 72 percent of its offering … while Prada is lowering its prices, large rivals like Gucci and Louis Vuitton have been hiking theirs … Prada’s strategy is paying off. Sales grew 9 percent in the first half of 2018.”

♥  Why Couldn’t I Make Minimalism Work? Because I Wasn’t the One Making the Mess. (The Washington Post): “No matter how much I edited my life, there was more mess, more overwhelm, another pair of shoes and stack of envelopes waiting for me. Though my belongings were at a stark minimum, my workload at home persisted as if nothing had changed … The reason my minimalism hadn’t changed my life was because most of the stressful accumulation had never been mine in the first place. If I were to remove the belongings of my husband and children, the house would be bare … There was (and is) little I owned, yet my workload in the home has always loomed large. Becoming a minimalist didn’t change that; it simply illuminated the invisibility of motherhood … What eventually helped me regain a sense of space and freedom in my life wasn’t minimalism. It was having (many) conversations with my husband about labor, and getting him to pick up his responsibility in our shared life. It’s astounding how much less our possessions bother me when I’m not constantly the one cleaning them up or reminding others to do so. I would hardly consider myself a minimalist today, but I frequently feel that sense of calm I chased in those curated minimalist designs — the blank space is in my mind, if not in my closet.”

♥  The Share Economy Is Coming for Your Closet (Vox): “Tulerie, a peer-to-peer, invitation-only fashion rental company … allows users to rent clothing, shoes, and accessories to one another, with the app acting as a medium for borrowers and lenders … shoppers have closets that are packed to the gills, thanks to fast fashion and the speedy pace of trend. This is something the Tulerie app, which launches Tuesday, aims to capitalize on … A Tulerie algorithm will generate how much items should be rented for — about 5 percent of the retail price for a four-day rental, with the number increasing for 10- and 20-day rentals. The company will take an 18 percent commission on rentals and provide shipping envelopes and labels for the users … if someone damages an item, they are liable for 200 percent of the retail value, a penalty Smith says is necessary to put lenders at ease.”

♥  The Transformational Bliss of Borrowing Your Office Clothes (The New York Times): “Mr. Schlottmann said he doesn’t worry that rentals will cannibalize sales. ‘The Rent the Runway customer is not a customer we’re losing … She’s not going to spend $1,500 on a dress, because she doesn’t understand the value. We kind of think we’re taking money away from fast fashion by letting her try on and rent clothes. Instead of having her buy Zara’s copy of our dress, I’d rather have her experience our construction, our fabric. Hopefully, she will buy it when she’s ready’ … As a private company, Rent the Runway declined to share its revenue or profit. Ms. Hyman also declined to specify how many Unlimited members there are, but said the subscription business was up 150 percent year over year.’”

♥  Algorithms Can Be a Tool For Justice—If Used the Right Way (Wired): “… if we turned that spigot of data and incisive algorithms toward those who presume to judge and control us: Algorithms should be another important check on the system, revealing patterns of unfairness with a clarity that can be obscured in day-to-day life. Are certain racial groups, neighborhoods, age groups being treated differently? Are there policy shifts that could correct such unfairness? As the Silicon Valley mantra goes, what you can’t measure you can’t improve.”

♥ Facebook Groups as Therapy (The Atlantic): “Over the past year, [Facebook] has been consciously emphasizing groups … These groups cover interests ranging as widely as the human imagination. Many are ‘closed,’ which in Facebook terminology means they are findable, but only members can see their content. Some are ‘secret’ and unsearchable, and membership is by invitation only … The internet has always promised to connect people by common interest rather than geography, and with its 2-billion-user base, Facebook is where those connections are often being made.”

♥  Teenagers, Forget Engineering. Your Future Is Craft. (The New York Times): “A youth crisis has been brewing in Italy for a while now. The unemployment rate for youth in Italy between 15 and 24 years old was just over 30 percent in August … some 50,000 people working in the luxury goods industry in Italy are close to retirement and that it will be a struggle to find qualified personnel to fill those jobs. The problem is, recent generations of Italian youth have increasingly shied away from traditional handwork, opting instead for seemingly more contemporary sectors like engineering, and cooking.”

♥ Redefining the Kilogram (Scientific American): “The official object that defines the mass of a kilogram is a tiny, 139-year-old cylinder of platinum and iridium that resides in a triple-locked vault near Paris. Because it is so important, scientists almost never take it out; instead they use copies called working standards. But the last time they did inspect the real kilogram, they found it is roughly five parts in 100 million heavier than all the working standards, which have been leaving behind a few atoms of metal every time they are put on scales. This is one of the reasons the kilogram may soon be redefined not by a physical object but through calculations based on fundamental constants … The redefinition of the kilogram will be part of a planned larger overhaul to make SI units fully dependent on constants of nature.”

♥ Streetwear Brands Are Looking to Chinatown for Inspiration, But at What Cost? (Fashionista): “When it comes to bootleg culture, it’s hard not to draw parallels between Chinatown, a neighborhood notorious for peddling counterfeit goods, and the free-for-all attitude that’s pervasive in streetwear … It exists on a luxury level, too. You have Demna Gvasalia riffing on Bernie Sanders’ campaign logo, Ikea’s signature Frakta shopping bag, and DHL’s signage for Vetements, and then there’s Jeremy Scott who’s earned a reputation for co-opting just about anything for either his namesake label or Moschino … But while there are knockoffs sold in Chinatown … it has nothing to do with Chinese culture; to solely equate Chinatown with bootlegs is a misrepresentation — and a disrespectful one, at that — of what the neighborhood embodies.”

♥  The End of Cheap Shipping From China (The Atlantic): “President Trump … is instructing the U.S. Postal Service to levy higher fees on packages from international destinations, including China. The announcement was not very controversial: A variety of parties involved in e-commerce … have been calling on the United States for a long time to charge more for delivery on behalf of foreign postal carriers … the United States will soon adopt its own self-declared terminal dues. The United States will also file a notice that it will withdraw from the Universal Postal Union.”

♥ Today is the last day of Shopbop’s surprise sale: take up to 40% off thousands of styles, prices as marked. I ordered the Harris Wharf London Pressed Wool Coat and the Free People Movement New Age Joggers. More sale picks:

♥  Inside the C.E.O.’s Social Media Meltdown at Deciem (The New York Times): “On Twitter, many users said that they were in the midst of a purchasing spree, even as they were not sure whether the company would continue to exist. Others wondered whether the whole debacle was a false alarm, or perhaps, some unintelligible form of marketing scam.”

♥  The Season of Peak Sneaker Silliness (The New York Times): “Some of these shoes are great. But many of them, the ones most often referred to as dad shoes, really look more like Frankenstein monsters of the foot, cobbled together from references and peer pressure, unwieldy and aggressively clumpy. They don’t free the wearer to take flight. They weigh her down … we are in a situation where the sneaker has become so removed from its original purpose (freedom, functionality) that it has become an end in itself, it may finally be deflating. When designers are making a sneaker just because they think they have to make a sneaker — because they are trying to carve off whatever slice of the sneaker market is possible — as opposed to because it makes sense for their brand, or their shopper, it’s time to stop.”