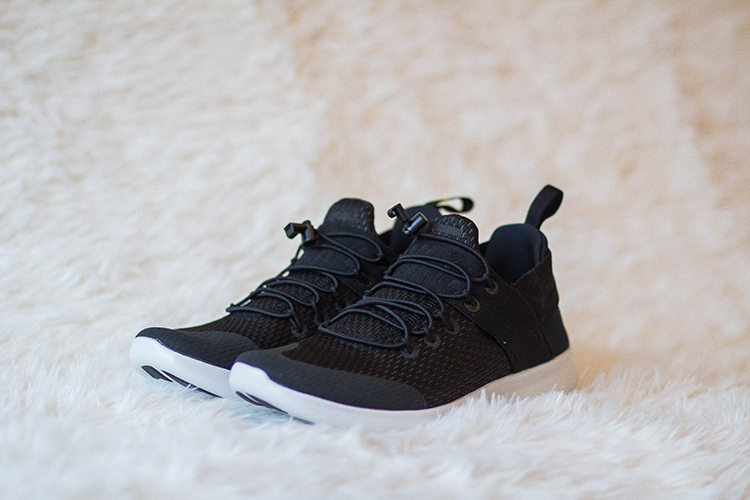 ♥ I ordered these Nike Free RN Commuter 2017 Running Shoes for my mom some weeks ago, as her walking shoes were looking… weathered. The reviews online are generally positive, but the heavily discounted price made me skeptical. Well, they arrived and were better than expected (especially at the sale price); the only issue was that they fit a size small for someone with wide-ish feet like me (and my mom). I ended up keeping these for myself and ordering the Adidas UltraBoost Running Shoes for my mom. (I normally wear a size 6.5 in dress shoes, size 7 in sneakers, and took these in a size 7.5)

♥ (The biggest takeaway from this article is that the number one growth category in men’s footwear is formal sandals.) The Death of the Plain Preppy Sneaker (Racked): “The growth of out-there sneakers starts with the athleisure movement of 2013 … As it suddenly became fashionable for women to wear yoga pants outside of the gym, men took their own tentative steps to follow suit, wearing their own fancy sweatpants to work … And if it’s okay for men to wear sneakers to work, the need for a whole category of dressy casual shoe that you could wear to work and also on the weekend — suede brogues, loafers, et al. — has basically evaporated. … As men have largely stopped wearing suits, sneakers have become a safely masculine way to express fashion authority.”

♥ The Fall of “Anti-Aging” Skin Care (Vox): “The industry claims to be moving away from anti-aging language, and yet it’s selling the same products and ingredients … For decades, beauty companies have sold youthfulness under various guises to a primarily female consumer group, brilliantly exploiting their concerns — or concocting new ones — while twisting legitimate science about how ingredients work. We’re now in a moment where women’s fears about the aesthetic effects of aging continue to be stoked, but buying something explicitly marketed as ‘anti-aging’ has fallen out of favor. The industry that invented the term is going through contortions to mute that messaging, though they’re of course still suggesting that you need these products.”

♥ (I link this article so one of you can remind me to be outraged if pockets don’t become “a thing” in women’s fashion as well next year) Think Your Clothes Have Enough Pockets? Think Again (The Wall Street Journal): “No longer an afterthought or mundane change-holder, pockets are the defining component of many designs. When brands showed their spring 2019 collections during Paris Fashion Week, two designers made pocket-packing vests a Big Thing: At Louis Vuitton, affixed wallet and pouch shapes directly onto cropped vests; and Junya Watanabe unveiled vests on which multiple pockets had been enthusiastically stacked. Meanwhile, labels from Gucci to Fendi slung ‘belt’ bags—essentially fanny packs—across their models’ shoulders, the kind of thing a certain man now throws on like a detachable kangaroo’s pouch.”

♥ The Race to Be the Biggest Resale Site in the World Is Heating Up (GQ): “The core of the company’s business is selling sneakers and streetwear, along with watches and handbags. But the grand vision for the site is to treat these goods like stocks, generating something like the true market value for an item.”

♥  Instagram Is Driving Jewelry Sales (Retail Dive): “When it comes to accessories, it appears that what you see is what you get. That is, what can be displayed in a selfie is what shoppers want to buy … Jewelry and other non-handbag accessories represent an often ignored sub-segment, despite the fact that they account for 18% of the apparel market, outpaced only by tops … A variety of other new patterns have emerged as well. For example, a new fashion quirk, wearing just one or mismatched earrings, is stoking purchases of earrings one at a time — sales of singular earrings are up by 29.5% in two years.”

♥ Can Mark Zuckerberg Fix Facebook Before It Breaks Democracy? (The New Yorker): “Zuckerberg used to rave about the virtues of “frictionless sharing,” but these days Facebook is working on ‘imposing friction’ to slow the spread of disinformation … As hard as it is to curb election propaganda, Zuckerberg’s most intractable problem may lie elsewhere—in the struggle over which opinions can appear on Facebook, which cannot, and who gets to decide. As an engineer, Zuckerberg never wanted to wade into the realm of content. Initially, Facebook tried blocking certain kinds of material, such as posts featuring nudity, but it was forced to create long lists of exceptions, including images of breast-feeding, ‘acts of protest,’ and works of art. Once Facebook became a venue for political debate, the problem exploded … At a certain point, the habits of mind that served Zuckerberg well on his ascent will start to work against him. To avoid further crises, he will have to embrace the fact that he’s now a protector of the peace, not a disrupter of it. Facebook’s colossal power of persuasion has delivered fortune but also peril. Like it or not, Zuckerberg is a gatekeeper. The era when Facebook could learn by doing, and fix the mistakes later, is over. The costs are too high, and idealism is not a defense against negligence.”

♥ The Worst Job in Technology: Staring at Human Depravity to Keep It Off Facebook (The Wall Street Journal): “No one knows how many people work as content moderators, but the number likely totals ‘tens of thousands of people, easily’ … Outsourcing firms … supply or manage many of the workers, who are scattered among the corporate headquarters of clients, work from home or are based at cubicle farms and call centers in India and the Philippines. The arrangement helps technology giants keep their full-time, in-house staffing lean and flexible enough to adapt to new ideas or changes in demand. Outsourcing firms also are considered highly adept at providing large numbers of contractors on short notice … Pay rates for content moderators in the Bay Area range from $13 to $28 an hour, say people who have held jobs there recently. Benefits vary widely from firm to firm. Turnover is high, with most content moderators working anywhere from a few months to about a year before they quit or their assignments ended.”

♥ Is A $48 Face Cream for Babies Worth It? (The Wall Street Journal): “Both startups and established beauty players are introducing fashionable lines of baby skin care products—filling a gap in the multibillion-dollar global baby-care market. The new lines’ botanical-rich formulations and stylish packaging appear to be targeting parents who are also savvy beauty consumers.”

♥ Why Men Are Looking to Space for Style Tips (The Wall Street Journal): “The promise of space travel first resonated through fashion in the 1960s and ’70s with designers like André Courrèges and Pierre Cardin serving up kooky Jetsons-style looks. But according to Patricia Mears, deputy director of the Museum at FIT and co-author of ‘Expedition: Fashion from the Extreme,’ what we’re seeing now is more about time traveling. “There are so many seismic shifts going on in society today,” said Ms. Mears. ‘One of the solutions is to look back in time. The other is to look forward.’”

♥ Fidget Spinners, Weighted Blankets, and the Rise of Anxiety Consumerism (Vox): “Unfortunately for the millions who do suffer from anxiety, everything is not fine. Though the disorder may be affecting a growing number of people, finding suitable care is increasingly difficult due to funding cuts for both treatment services and research programs and a generally broken health care system. So it makes sense that more people are turning to digital therapists, meditation apps, and even tampon brands in lieu of access to medical care. Media companies have been built around the mental health crisis, while videos designed to calm us down go viral. Even our most primitive need — sleeping — has somehow become a fun, sexy industry … But no product will solve the underlying causes of anxiety, or ADHD, or obsessive-compulsive disorder, or autism, whether it’s a $5 gas-station fidget spinner or a $250 blanket meticulously designed and focus-grouped by advertising professionals. That’s a far bigger task, involving: therapy (often difficult to access), medication (often expensive), or complete lifestyle overhauls that involve fitting exercise and healthier habits into our daily lives (often really, really hard).”

♥  The Rise of the Zombie Small Businesses (The Atlantic): “… the rise of big businesses is having a number of harmful effects on the economy. For instance, increasing concentration seems to be stifling innovation. Market-dominant players might dampen innovation by buying up their smaller, leaner, and more creative competitors; by patent-trolling; and by signing contracts with suppliers and clients that in effect black-ball their competition out of the market. The end result? Higher profits for the few, and a slower and less dynamic economy for the many.”

♥ Who Controls Your Data? (Engadget) “Our phones are not only tools that help us organize our day but also sophisticated monitoring devices that we voluntarily feed with interactions we think are private … the key to understanding how our data is used, however, is to see how it’s analyzed. The categories we are put into and how our behavior is modeled have a profound effect on how we use technology … There are three types of data … The first is data that you consciously give companies: your name, email, date of birth. The second is automatically monitored: where you log in from, what time you do it, where else you visit on the web. The third and most difficult to obtain is data that’s modeled or predicted from other data, such as your quantified attractiveness or trustworthiness. ‘A lot of organizations don’t consider modeled data to be personal data … The main misunderstanding is people only ever think about the data that they actively share. And also companies love to talk about the data that we share’ … e already know that companies amass data on us. What we don’t know is how they interpret that data and then use it to influence our lives.”