♥ In true masochistic fashion, the first thing I do in the morning is read the news. And news these days has a way of making me feel anxious and powerless. I’ve taken to re-reading At the Existentialist Café, which I originally read in 2016, as a refuge from this anxiety-inducing world. Existentialist themes of freedom and authenticity seem especially appealing when everything feels meaningless and absurd.

♥ Made-to-order fashion seems to be the next frontier for fast fashion. This month, Zozo–a service created by the man behind Zozotown—will start offering made-to-order jeans, button downs, and t-shirts. While I am intrigued by the technology that powers Zozo, I am slightly skeptical that it’ll find success in the U.S., as it lacks brand recognition outside of Japan.

♥ Mere weeks after saying in a court filing that its acquisition of Time Warner will lead to “reduced prices” for consumers, AT&T will raise prices on DirecTV subscriptions later this month. If you need to vent, feel free to join this heated Reddit thread.

♥ I have to say, I have never been bothered by the many names of the “cruise”–or “resort” or “holiday” or “travel”–collection, but apparently the absence of agreement among designers about this collection causes some (or just one) fashion insiders a great deal of anguish.

♥ Alice + Olivia‘s “End of Season Sale” just started, and select styles are now up to 75% off. My picks:

♥ More Perfect–currently on hiatus–is one of my favorite podcasts. An episode that haunts me is the one about Korematsu v. United States (recently overturned); in particular, a segment featuring Judge Richard Posner, who said this of the U.S. Supreme Court: “Do you think these Supreme Court justices are great big brains, big stars who are selected because they are the best lawyers in the United States, and their decisions are usually great? You think all that? I don’t. I don’t have a high respect for the Supreme Court at all. You look at their decisions. You look at them: how they are appointed; who appoints them. So why do you think the Supreme Court is such a great balance to the President in a war?” Many find it comforting to think of the judicial branch as a check on executive and legislative power, but that belief may be mistaken. And with the retirement of Anthony Kennedy, that discussion (if the Supreme Court is influenced by special interest) is again brought to the forefront: I want to share again this video from Full Frontal with Samantha Bee that I previous linked about “The Federalist Society’s VP Of String-Pulling.” (Related reading: The Conservative Pipeline to the Supreme Court from the New Yorker.)

♥ JD.com, a Chinese e-commerce behemoth that has been compared favorably to Amazon in recent years, has been leveraging its influence in China to pilot programs that Amazon struggles to obtain regulatory approval for. Its warehouse robots and delivery drones are both further along in development than Amazon’s programs, attracting investments from the likes of Google and Walmart.

♥ I developed a passing interest in thrifting several years ago, encouraged by the luck that others seem to have when visiting vintage stores. My interest died quickly, though, as my respiratory system was irritated by the distinct smell of second hand stores (resulting in violent sneezing fits). If you’ve ever wondered what that smell is, a New York Times reporter committed to “Getting to the Bottom of ‘Thrift Store Smell’.” 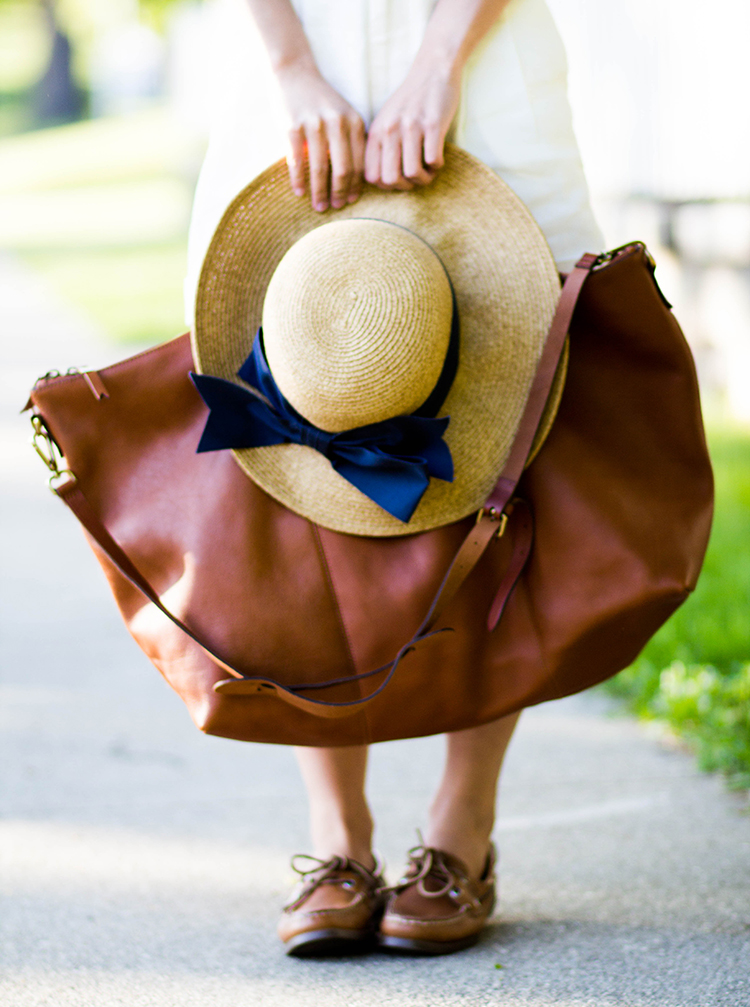 ♥ One of my favorite duffel bags, the Madewell Transport Weekender (reviewed here), is currently on sale in two colorways at Shopbop. Here are some other attractive sale finds from Shopbop’s summer sale:

♥ GDI, the ACLU. Just take all of my money already. (Here’s the actual link to donate.)

♥ Modern Love is a column that I read with interest every week, even though I can rarely relate to the relationship struggles explored in the stories. And while I can’t begin to understand on a personal level last week’s story, “He’s Going Back to His Former Wife. Sort Of.,” I thought the storytelling was refreshingly positive and humorous for a situation that could very easily have been told grimly.

♥ The Jackie O, one of my favorite Black Halo styles, is currently heavily discounted at Amazon in select colors and sizes. It’s worth a look if you are in the market for tailored dresses and jumpsuits (note that dynamic pricing is in play so it’s unknown for how long these lower prices will remain): cap-sleeve jumpsuit (here in petite), 3/4-sleeve jumpsuit, cap-sleeve dress, and printed dress (also here).

♥ The redevelopment of a closed Ford factory in St. Paul (MN) that will turn it into a new residential neighborhood–over twenty years–has engendered a “bitter” intergenerational battle.

♥ I have been dragging my feet when it comes to joining MoviePass, despite knowing that it’s one of those too-good-to-pass deals (at least in the beginning). I’d mentally commit to joining, then read a negative review, and talk myself out of joining. There’s just something disquieting about its premise. Anyway, it didn’t take long for AMC to enter the fray: the theater chain now offers its own subscription program and it may be even better than MoviePass, if you prefer premium movie offerings. For $19.95 a month (plus tax), you can see up to three movies a week (there are no restrictions on the type or frequency of movie).

♥ Sale styles at Anthropologie are now an extra 40% off, no code needed. Shipping is free on orders over $150 for AnthroPerks members (membership is free). My picks:

♥ Commuter-wear… is the new athleisure?

♥ I bought my first Dyson vacuum last year and, boy, has my quality of life improved. As I’ve mentioned before, I don’t particularly enjoy housework (not uncommon), but the Dyson V8*, with its clear dust bins, appeals to a perverse urge to purge and a preoccupation with disgust that reside in some of us (see: pimple-popping videos). Anyway, I am reminded of this New Yorker profile of James Dyson, the man who conceived of this genius of a vacuum, from some years ago.

* BTW, as much as I love this vacuum and the fact that it’s cordless, its battery life is only like 7 minutes long at full charge in max power mode.