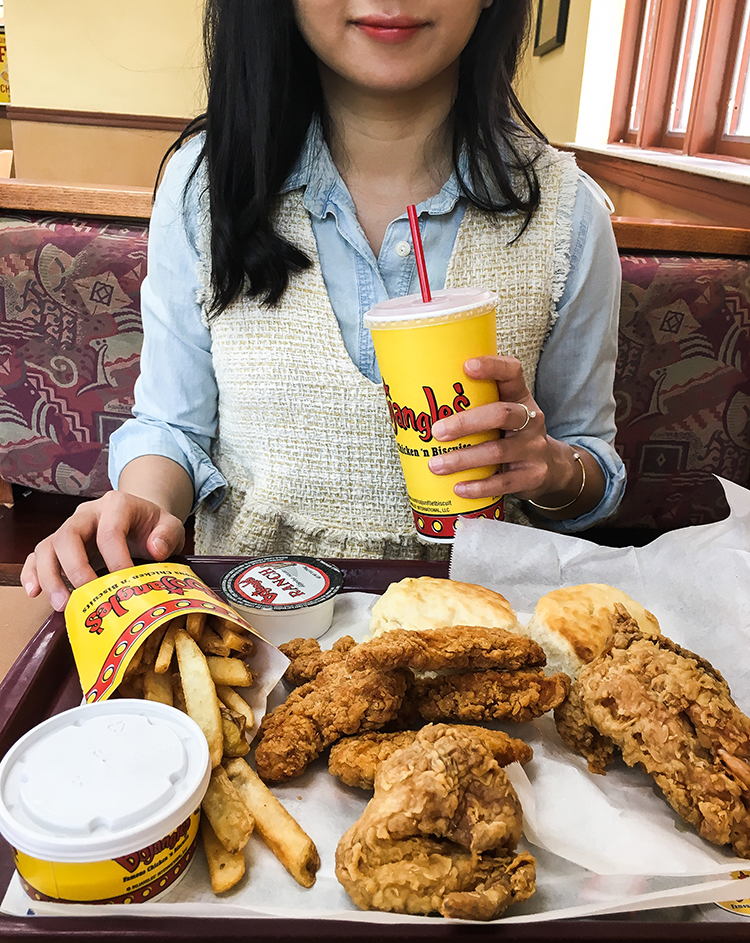 At Bojangles’, feeling maybe the happiest I’ll ever be

▪ Among the various Google alerts that crowd my inbox is one for Bojangles’ Northeast expansion. And it wouldn’t be an exaggeration to say that I’ve been disappointed on this front for some time. Three years after its IPO, Bojangles’ growth has slowed, as new markets have not returned the revenue growth that it anticipated. But I mean, at what point do you stop waiting for Bojangles to come to you, and just become a franchisee? That’s no easy question for a fast food fan to answer, but imagine having to answer this question: do you open a McDonald’s in North Korea? The ramifications are far-reaching, and likely history-changing. I am so relieved no one expects me to answer these impossibly difficult questions.

▪ (This two-part series is long but compelling; set aside at least half an hour for them.) Blood Will Tell: Part I (ProPublica): “Though these police officers lacked the advanced scientific education of their predecessors, they, too, began to use bloodstain-pattern analysis to reconstruct crimes. Blood, they held, had a story to tell.”

▪ Blood Will Tell: Part II (ProPublica): “Rather than serve as gatekeepers who assessed the credibility of supposed scientific testimony before admitting it into evidence, many judges simply depended on the previous use of bloodstain-pattern analysis in the courts when deciding whether to allow it. Legal precedent, not science, served as their guide.”

▪ (Video Link) Guardianship: Last Week Tonight with John Oliver (YouTube) (Related: I had previously shared this New Yorker piece about “How the Elderly Lose Their Rights; it’s a worthwhile read.)

▪ For a limited time, “home entertaining” goods at Neiman Marcus are 25% off (no code needed; prices as shown). Included in this category is “gourmet food,” like the Yoku Moku cookies and Godiva biscuits that I buy from time to time. I just ordered a box of Yoku Moku Cigare au Chocolat, which usually disappears within a day when I get them.

▪ The Housewives of White Supremacy (The New York Times): “… tradwives remain worth contemplating because they help illuminate some of the forces that drive the alt-right and where the movement might be going. The alt-right is abhorrent; it is racist and hate-filled. But it is, like any other mass movement, also driven by a sense of dissatisfaction with modern life. Tradwives help us understand the sources of that dissatisfaction by revealing points of overlap between red-lipsticked mothers of six and the men who complain of being ‘kissless virgins.‘”

▪ The Chefs We Don’t See (Eater): “In the food-writing world right now, the conversations related to #MeToo rarely touch on how female culinary professionals might reclaim their lost livelihoods and dreams. Instead, the question is what do we do with these men? The reckoning, so far, has not reckoned with food media’s reluctance to tell women’s stories.”

▪ The Terrifying Lessons of a Pandemic Simulation (The New Yorker): “Even within the artificial confines of the simulation, there was a lack of leadership. Everyone agreed that the President had the final word on everything in general, but nobody seemed to be responsible for America’s outbreak response specifically.”

▪ How to Keep Your Bed as Cool as Possible This Summer (Lifehacker): “If you aren’t already running your air conditioning, turn it on a few hours before bedtime … According to the National Sleep Foundation, we sleep best when we’re in a 65-degree room.”

▪ ‘This Election in California May Make All the Difference’ (The Atlantic): “Orange County is increasingly diverse, Republican voter registration in the state of California has fallen behind not just Democratic registration but no party affiliation at all; and the backlash to Trump’s election has energized the Democratic base and inspired first-time candidates for office nationally. Except as it turned out, it was much more complicated on the ground level … The surge in activism and candidates getting involved may have actually backfired: So many Democrats are running in a couple of these districts that they might get shut out of the general entirely, even though the national party apparatus is throwing millions of dollars at the problem.”

▪ How Anna Delvey Tricked New York’s Party People (The Cut): “When you’re superrich, you can be forgetful in this way. Which is maybe why no one thought much of the instances in which Anna did things that seemed odd for a wealthy person: calling a friend to have her put a taxi from the airport on her credit card, or asking to sleep on someone’s couch, or moving into someone’s apartment with the tacit agreement to pay rent, and then … not doing it. Maybe she had so much money she just lost track of it.”

▪ In a Warming West, the Rio Grande Is Drying Up (The New York Times): “The Rio Grande is a classic “feast or famine” river, with a dry year or two typically followed by a couple of wet years that allow for recovery. If warming temperatures brought on by greenhouse gas emissions make wet years less wet and dry years even drier, as scientists anticipate, year-to-year recovery will become more difficult.”

▪ How Britain Let Russia Hide Its Dirty Money (The Guardian): “Over the past decade, £68bn has flowed from Russia into Britain’s offshore satellites such as the British Virgin Islands, Cayman, Gibraltar, Jersey and Guernsey … This wealth is not actually in the offshore centres – it is just registered there, which helps to obscure its origins. If you’re a Russian official whose wealth is wildly disproportionate to your salary, this anonymity allows you to spend your money in London without anyone realising you’re a crook. The French economist Thomas Piketty estimates that more than half of Russians’ total wealth is held offshore in this manner – some $800bn (£597bn) – and by a tiny number of people, perhaps just a few hundred … This means that there is not a single sewer pumping dirty Russian cash into the UK to which we can attach a meter, so as to measure its output. Instead, the cash is diluted into the great tidal flows of liquid capital that pour in and out of the City of London every day, from every corner of the globe.”

▪ How Do Aliens Solve Climate Change? (The Atlantic): “In our approach, the exo-civilization’s population and the planetary environment are braided together by energy use and its consequences. The planet gives the civilization energy resources. The civilization consumes them to do the work of civilization building. As a civilization harvests more power from the planet, its capacities soar … Using all that energy has to result in feedback on the planet. That’s what we earthlings are just starting to see with climate change. If global warming gets really nasty, everything from energy harvesting to food production is going to get severely stressed and our large human population won’t be sustainable … our exo-civilization models linked rising planetary impacts with population declines.”

▪ The ‘Sex Cult’ That Preached Empowerment (The New York Times): “Much of today’s upper class is engaged in a frenzy of self-improvement. They want to be skinnier, healthier, younger-looking, smarter, nicer, more loving and, since Trump assumed the presidency, more politically aware too. But were they truly improving? They may eat more vegetables, but this age seems more narcissistic than any before, more beholden to snake oil, and has put many individuals in the grip of an uneasy self-image toggling between unrealistic grandiosity and soul-crushing envy. Nxivm positioned itself as the true self-improvement gospel.”