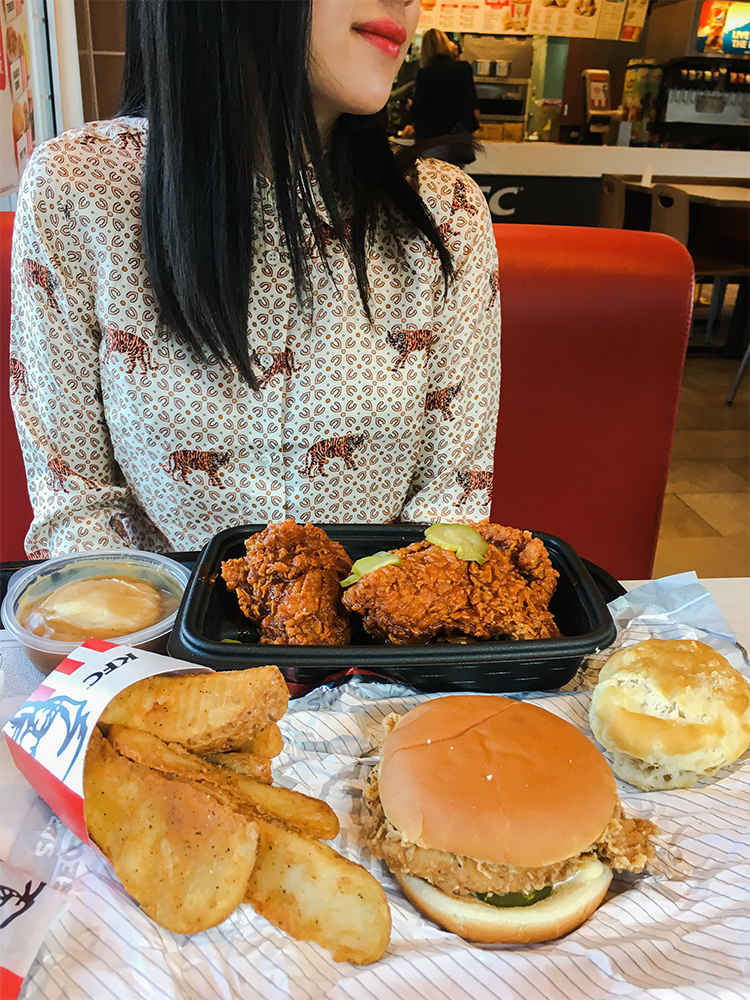 ▪ Business Insider is always quick to report on new fast food menu items, but I don’t often agree with its assessments (I am frankly tired of its clear and unabashed love of Chick-fil-A). Last month it reported on KFC’s “the Crispy Colonel” and gave it a glowing review (“The Crispy Colonel is an impressive sandwich that shines bright amongst fast-food rivals“). I have to say, having given the new sandwich three chances, unless your chicken fillet happens to have just emerged from the pressure fryer, this sandwich is extremely underwhelming.

▪ What is not underwhelming is J. Crew’s Silk Twill Button-Up in Tiger Print (seen above). Sure, it needs a thorough steam before first wear, and the color scheme is a little limiting (in both color pairings and my imagination), but I love how well it elevates the basic blouse-and-jeans look. The fit is true to size, though the cut is tailored enough that you can comfortably size up if you are in between sizes.

▪ Speaking of J.Crew, the retailer just added some 300 styles to its sale section, including the lovely and (mostly) well-reviewed V-Neck Sheath Dress in Lemon Jacquard.

▪ How do you sell American Chinese cuisine in China? You advertise it as an “American bistro.”

▪ I feel ambivalent about Marchesa (it and Elie Saab’s shows are always among my favorites), one of the collateral damages of the Harvey Weinstein scandal. It is undeniable that the brand was helped by its connection to Weinstein, but also undeniable is the fact that the brand made swoon-worthy dresses. The takedown of Marchesa just feels very baby-thrown-out-with-the-bathwater-y to me. Anyway, here’s a sympathetic Vogue profile of Georgina Chapman which portrays her as but another of Weinstein’s victims (even if she doesn’t see herself in that role).

▪ A Bloomberg article warns that “Victoria’s Secret Could Become the ‘Sears of Brassieres’” as the lingerie purveyor’s parent company’s stock trades at seven-year lows.

▪ Fast Company takes a few shots at Birchbox in two articles bluntly titled, “Basically, no one wanted to buy Birchbox” and “Here’s Why Nobody Wants To Buy Birchbox, Even After VCs Spent $90M.” The good-ish news is that, despite its troubles, Birchbox has just received a $15 million injection of cash to stay afloat.

▪ Everything is 20% off at Anthropologie this weekend in celebration of Mother’s Day. Here are two new closet favorites that I would recommend: Pure + Good Brushed Fleece Wrap Top and Moth Amoruso Cardigan.

▪ Last Thursday, Nordstrom Rack joined the (now long) list of companies with a recent racial profiling incident. The saddest detail of this incident was how, after realizing they were being followed by store employees, these teenagers felt the need to “buy some items to show that the employees had been wrong, that they were not stealing and that they had money to spend.”

▪ Walmart is still trying to buy its way ahead of Amazon (The New York Times).

▪ It’s common knowledge that different hospitals charge vastly different prices for the same procedures; what I was surprised to learn (from this new study reported by Vox) is that “within-hospital price variation is responsible for about one-fifth of all price variation in the United States.” It turns out insurer “clout’ is a very meaningful factor in service prices.

▪ Tim Draper is once again in the headlines: this time, instead of Six Californias, he envisions just three.

▪ Among the tips (some of which seem obvious) given in this HBR article “8 Ways Brands Can Fight Counterfeits in China” are “place product images in your ads that are subtly different from the real items” and using QR codes and RFID tags to track products.

▪ Regulators approved the Luxottica-Essilor merger in March, allowing for the creation of a corporate leviathan. At an inopportune time, no less. We should all be as concerned as the author of “The Spectacular Power of Big Lens” about the consolidation of this important industry.

▪ Burberry is currently suing Target for copying its trademarked check patterns. Seriously, Target, of all the things you could’ve copied, why did you have to choose (perhaps) the most conspicuous design?

Have a great weekend!