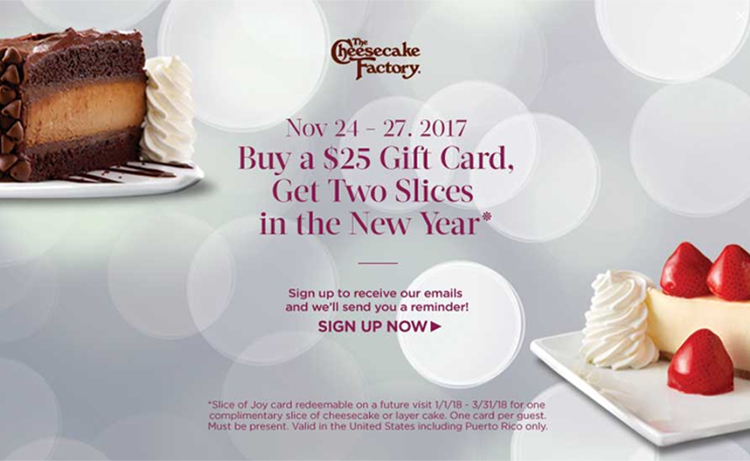 ▪ Retailers, as expected, are rolling out pre-Black Friday sales (or “preview” sales), hoping to capture the dollars of eager shoppers. As always, I will be posting a roundup of the best sales and sharing some deals that I consider promising. I also want to thank Cammie, who let me know on IG that the Cheesecake Factory will be running my favorite promotion again this year (for every $25 gift card purchased, receive two certificates for complimentary cake; sale starts 11/24 and ends 11/27).


▪ Who Will Mourn Teen Vogue? (The New York Times): “… Teen Vogue will continue to publish articles online, leaving Seventeen and J-14 as the only mainstream print lifestyle magazines for that age demographic.“


▪ We Spent a Decade Fighting Our Bank Over $482.08 (Vice): “… billing statements could, at least in theory, become a profit center for banks whose consumers have no wherewithal to fight back. This is why some members of Congress want to require regulators to revoke federal bank charters from recidivist banks accused of repeatedly showing disregard for the law.“


▪ Why This Cardiologist Is Betting That His Lab-Grown Meat Startup Can Solve the Global Food Crisis (Inc.): “Meat without animals. It’s not a new notion. In a 1932 essay predicting sundry future trends, Winston Churchill wrote, ‘We shall escape the absurdity of growing a whole chicken in order to eat the breast or wing, by growing these parts separately under a suitable medium.’ The basic science to grow meat in a lab has existed for more than 20 years, but no one has come close to making cultured meat anywhere near as delicious or as affordable as the real thing. But sometime in the next few years, someone will succeed in doing just that, tapping into a global market that’s already worth trillions of dollars and expected to double in size in the next three decades.“


▪ The Devious Art of Lying By Telling the Truth (The BBC): “Paltering is perhaps so commonplace because it is seen as a useful tool. It happens because we constantly have so many competing goals … We want to achieve our narrow objective … but we also want people to see us as ethical and honest … these two goals are in tension and by paltering, people believe they are being more ethical than outright lying.“


▪ The Swag Project (Racked): “For six months, [Racked] collected and tracked everything we got — eyeshadows, athleisure, the odd bong — along with all the packaging it came in, to see what we at Racked were dealing with.“


▪ Scents from a Mall: The Sticky, Untold Story of Cinnabon (Seattle Met): “Cinnabon was intended to be a national chain, even before the first customers lined up to sample the cinnamon rolls … Irresistible … this nebulous yet knowable sensation was the only mandatory aspect of his dream cinnamon roll.“


▪ Grad Students Are Freaking Out About the GOP Tax Plan. They Should Be (Wired): “… [in] the GOP’s recently unveiled tax-reform plan … is a proposed repeal that would cause graduate students’ tuition waivers to be counted as income—making them subject to taxes … Current and would-be graduate students fear that, were the bill to pass, getting a PhD in the US could become financially impossible … The more debt students graduate with, the less likely they are to pursue relatively low-paying or financially risky jobs … Many academics fear the tax burden would waylay efforts to increase social and intellectual diversity at their institutions.“


▪ The U.S. Flooded One of Houston’s Richest Neighborhoods to Save Everyone Else (Bloomberg): “Until 2012 the government successfully argued that it wasn’t legally responsible for decisions made in response to temporary flooding. That year the Supreme Court laid out a new multifactor test that could establish government liability in such cases. The majority opinion, written by Justice Ruth Bader Ginsburg, held, for example, that the government should compensate a property owner for a taking if it has interfered with a ‘reasonable, investment-backed expectation.’ That is, if it was reasonable to expect that a home you invested in wouldn’t flood, but it does, and a court finds the government responsible, then compensation could be due.“


▪ 3 Years Ago, Stockton, California, Was Bankrupt. Now It’s Trying Out a Basic Income. (Vox): “The fiscal situation in Stockton is much improved from when it fell into bankruptcy, but a truly universal, not-lotteried benefit at the municipal level would be challenging to enact. The plan would likely trigger an influx of residents from nearby towns … The town, facing high borrowing costs due to its junk bond-level credit ratings post-bankruptcy, would need to raise taxes in response to that. Higher taxes could in turn lead some high-income residents to leave, setting off a vicious cycle.“


▪ How iFixit Became King of the iPhone Teardown (Motherboard): “It may sound absurd, but the most interesting and arguably most important thing to happen on iPhone release day is not the release of the phone but the disassembly of it. The iPhone teardown, undertaken by third-party teams around the world, provides a roadmap for the life of the device: When you inevitably break the screen, will it be easy and inexpensive to fix? Are there design flaws that will potentially cause widespread problems, such as the iPhone 6’s bendgate? And, most importantly, who made the iPhone? … iFixit’s teardown isn’t just about taking the device apart; it’s about trying to identify every single chip within the phone, its function, its manufacturer, and its likelihood to make any given phone repair easier or more difficult. For the next 10 hours, Wiens and his team methodically disassemble the phone. They x-ray some individual components in an attempt to learn their provenance and call the world’s foremost chip analysts and experts to run part numbers or brainstorm what unfamiliar chips could do.“


▪ Snapchat’s New Test: Grow Like Facebook, Without the Baggage (The New York Times): “In an attempt to spur user growth, Snap’s chief executive, Evan Spiegel, announced that Snapchat would be redesigned to make it easier to use. The app, which featured a minimalist design that appealed to teenagers while often perplexing their parents, will soon have a personalized feed that uses algorithms to show relevant stories to users, rather than making them sift through a reverse-chronological feed. Twitter made a similar change last year, also under pressure from Facebook … Snap’s pivot is more than a necessary business move. It’s an indictment of our current tech landscape, and a warning sign for other start-ups hoping to take on the largest internet companies on their own terms. If a wildly creative company with an app used by 178 million people every day can still be crushed by Facebook, how is anyone supposed to succeed?“


▪ How the Frightful Five Put Start-Ups in a Lose-Lose Situation (The New York Times): “The technology industry is now a playground for giants. Where 10 or 20 years ago we looked to start-ups as a font of future wonders, today the energy and momentum have shifted almost completely to the big guys … Because today’s giants are nimbler and more paranoid about upstart competition than the tech behemoths of yore, they have cleverly created an ecosystem that enriches themselves even when they don’t think of the best ideas first. The Five run server clouds, app stores, ad networks and venture firms, altars to which the smaller guys must pay a sizable tax just for existing. For the Five, the start-up economy has turned into a heads-I-win-tails-you-lose proposition — they love start-ups, but in the same way that orcas love baby seals.“


▪ Drug Companies Make Eyedrops Too Big, And You Pay For The Waste  Listen (NPR): “Eyedrops overflow our eyes because drug companies make the typical drop — from glaucoma drugs that cost hundreds of dollars to cheap over-the-counter bottles — larger than a human eye can hold. Some are so large that if they were pills, every time you swallowed one, you’d toss another in the garbage.“


▪ Rethinking Sugar Water (Tedium): “… the real problem was that Virgin Cola had little in the way of advantage, maybe a slight difference in taste, but the brand was going up against other companies with brands that were just as good, if not better.“


▪ Five Tech Myths People Still Believe (The New York Times): “… top-of-the-line specs don’t guarantee that your phone or computer will work any better for you than one with more modest features … while it’s easy to get caught up in the game of latest-and-greatest, you should really pay attention to the features that matter to how you’ll be using your new computer, phone or other device … The idea that you should always completely discharge a battery before charging it up again has legitimate origins, but it doesn’t apply to current technology … Megapixels still count … but it doesn’t necessarily tell you how good the photos taken by that camera will be … pricey extended warranty runs right alongside the existing manufacturer’s warranty, which means you may be paying twice for coverage the phone’s maker already provides … if you use a credit card, you may even have extended warranty protection through the card’s issuer — check with that company before you add the pricey phone to your cart.“


▪ Money Diaries, Where Millennial Women Go to Judge One Another’s Spending Habits (The New Yorker): “The most lurid corner of the Internet is not a new dating app or a fetish site. It’s not an alt-right forum or a bitcoin marketplace, nor is it some channel of the deep Web where novel, illicit substances are heavily trafficked. It is the life-style site Refinery29’s Money Diaries, a column in which anonymous young professional women document every penny they earn and spend in a week … in the world of the Money Diaries … no amount of honesty goes unpunished.“


Have a great weekend, everyone!