Life is funny sometimes. Really, just when you think you’ve already explored every option and resigned yourself to a lesser recourse, the opportunity to walk down the original path springs up.

My shoe story illustrates this anomaly quite well.

A little less than a year ago, I became quite consumed with the idea of owning a pair of Valentino studded pumps. I was open to either black or “poudre” (powder) and was negotiable on the height of the heel. After months of fruitless search, I was even amenable to the idea of paying full price. Alas, it seemed I was a beat behind the fashion phenoms and I couldn’t for the life of me locate a pair in my size.

I then began what is known as the “ebay scramble” – what one does when she realizes that she missed out on something she didn’t know she need or wanted. When my ebay search came up empty, I was disappointed and thought all hope was lost (I know…they are just shoes). At around the same time, my friend M, who is well connected and has lots of other fashion-conscious friends, was in a similar dilemma. She called in a favor and got us both on the waitlist for Valentino lookalikes that one of her friends was planning on ordering from a Chinese website (sort of like ebay/amazon in concept…sells candles, cars, and everything in between). It was my first experience ordering from the website and I had no idea what to expect but when the dusts had settled I was feeling pretty excited about finally owning shoes that are similar to the studded pumps.

Almost immediately after I remitted payment for my lookalikes, it was like the stars aligned and nearly every major department store received more stock of the Valentino pumps. I felt ambivalent about my previous purchase and was angry at myself for not waiting just a bit longer. I did quickly place an order for a pair of poudre 4-in pumps from Nordstrom’s. 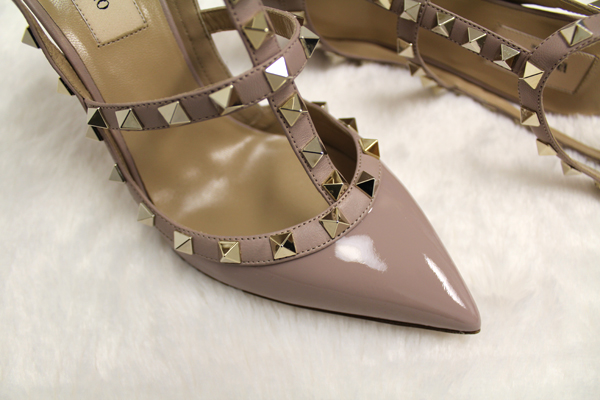 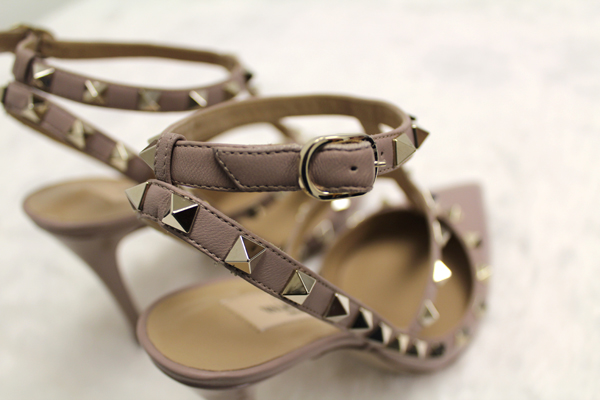 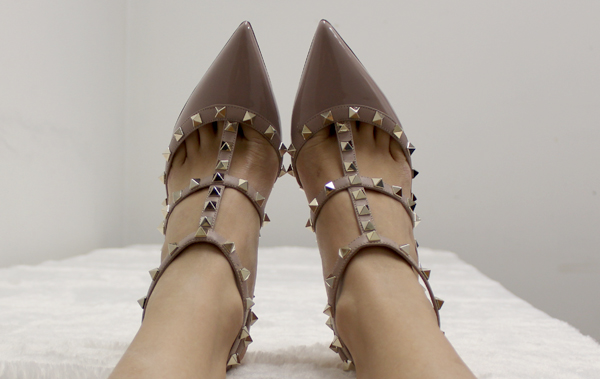 To be honest, the shoes were underwhelming for $900 and I returned them the day I stumbled upon and purchased a pair of mid-heel studded pumps on sale at Neiman Marcus (a past season popback).

I should address my purchase from this Chinese seller and why I would caution you against ordering. While the store admits that the shoes are not authentic Valentino’s (shoes do not come with the signature red Valentino box, dust bag, or authenticity cards) and are merely great dupes, it does emphasize how well they replicate the design down to the tag. I have always frowned upon the practice of wearing and buying counterfeits (though luxury makers will have to try harder to convince me that my shoe purchase directly supports terrorism and human trafficking) and for the most part regret my purchase of these shoes as I do want to support innovation and great designs.

It’s definitely not my first offense – though I consider it my most egregious. I routinely shop at Forever 21, whom I consider the king of duplicating designs, wear Steven Madden shoes, and have owned Marc Jacobs bags that “draw inspiration” from Chanel and Dior. At what point does close copying cross the line – or has fashion become just a regurgitation of past trends?

I’ve thought about just trashing these shoes but I admit I hate “wasting” perfectly good clothes/shoes/accessories. I could donate them but I didn’t want to inject good counterfeits into the second-hand market where unsuspecting people could mistaken them for the real thing. After a lot of deliberation, I decided to keep and wear them. I won’t attempt to pass them off as the real deal, will be honest about their origins, and is somewhat prepared to deal with any criticism that might come with wearing them.

I won’t be posting the link to the shoe seller on the blog. And The seller no longer sells these shoes, as far as I have been made aware.