With Chanel classic flaps expecting another price increase in January, I recently took the plunge and ordered a new design that bears a strong resemblance to the bestseller. The bag, referred to by many as a “clutch,” is a fair alternative to the classic flap if 1) you don’t carry more than the bare minimum when you use this bag 2) you are lacking a versatile evening bag 3) you are not buying this as a replacement for the classic flap.

This bag is by no means perfect but fits my criteria well. Read on if you are in the market for a bag that takes you from day to night.

Here are the basics: 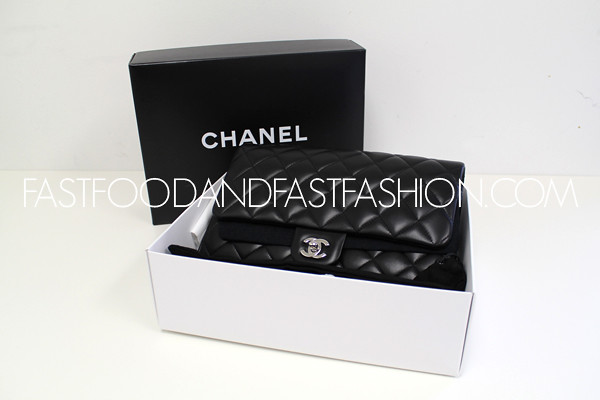 One of the common complaints about last fall’s flap clutches is the flattened appearance of the quilts. The quilts on the classic flaps look much more lively and prominent. This problem isn’t as obvious on the new bags for cruise as it is on the caviar from last fall. 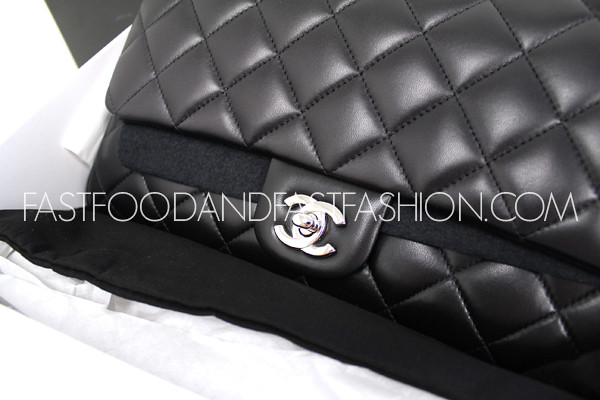 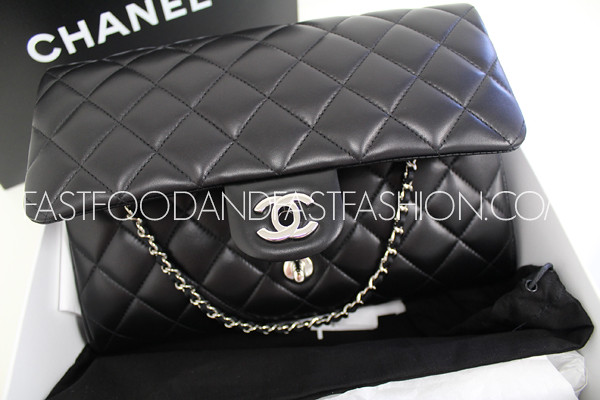 One thing that slightly bothers me (ok, really bothers me) is the fact that the quilting in the back pocket are misaligned. I think this issue may be universal among the flap clutches as the few that I have seen all have this issue. 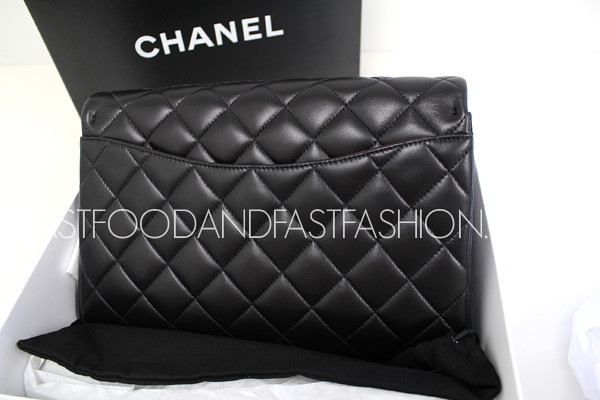 The black flap clutch in lambskin has leather burgundy lining, a nod to the older styles of the black classic flap. 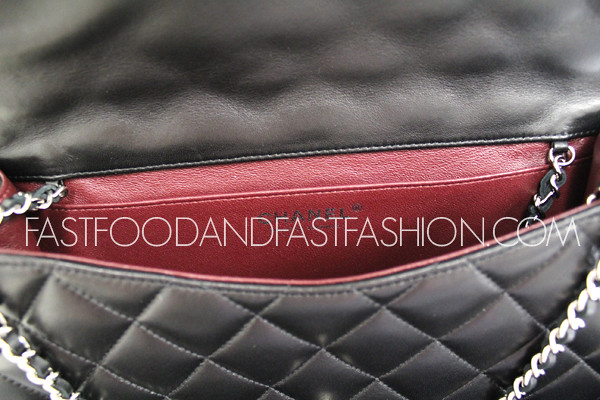 I am not a big fan of the rings that hold the chains to the bag, they seem so flimsy! I wish this bag were designed like the wallet on chain (WOC), where the chains are looped through the inner flap and the weight of the bag can be better distributed. 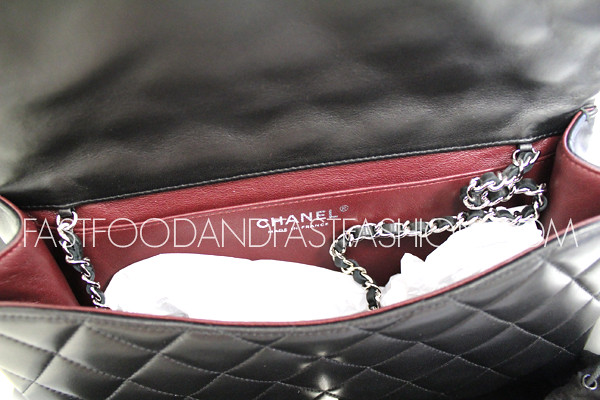 This bag caused quite a bit of confusion earlier in the season when Neiman Marcus made a mistake in its resort book and incorrectly ID’ed a lavender jumbo flap as a $2100 flap bag. 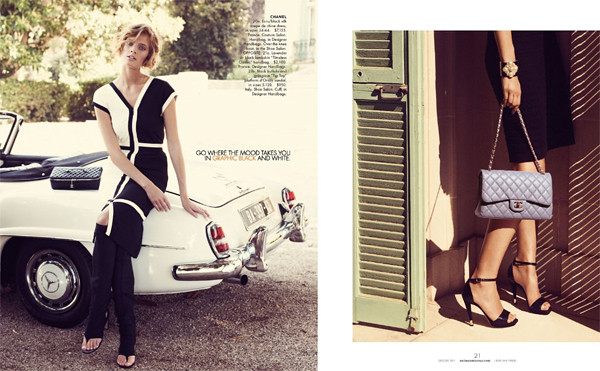 Chanel lovers were quick to notice the price and more than a few people concluded that maybe Chanel made changes to the flap clutch from A/W 2011 and re-released it with more classic designs. 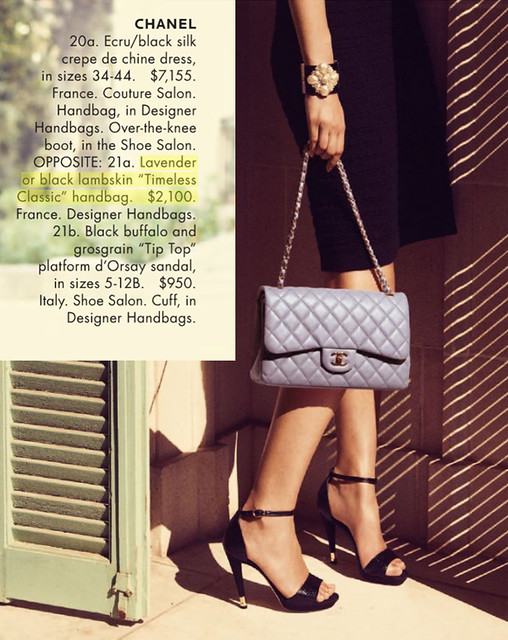 Note that in the Neiman Marcus pictures, the chains are not held in place by little rings inside the bag. The chains in the picture look like ones on the classic flaps, where the chains enter through two holes at the top of the bag.

What followed was a mad dash for the bag (or the waitlist, since it hadn’t shipped at the time).

It wasn’t until a few weeks ago, when the flap clutches from the new season started to arrive in stores, that the truth came to light. The answer was simple: Neiman Marcus misidentified the jumbo flap in the book.

I was slightly disappointed to learn that the bag in the book was not the $2100 flap clutch. It wouldn’t have been in Chanel’s interest to release a bag that looks nearly identical to the classic flap but priced far below the original. 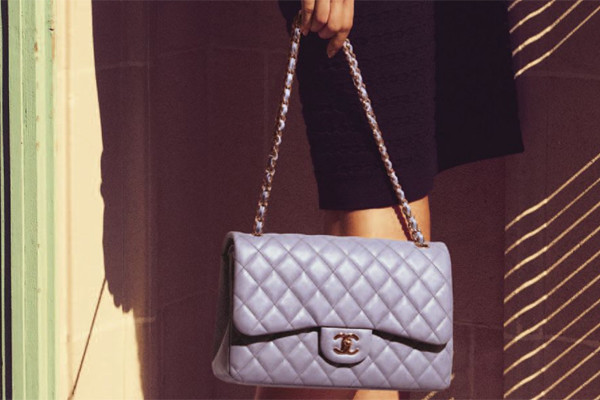 Here is how the flap clutch compares with a caviar jumbo flap. The two don’t different much in size except in depth. The jumbo looks about 20% bigger (a tad wider and a little taller). 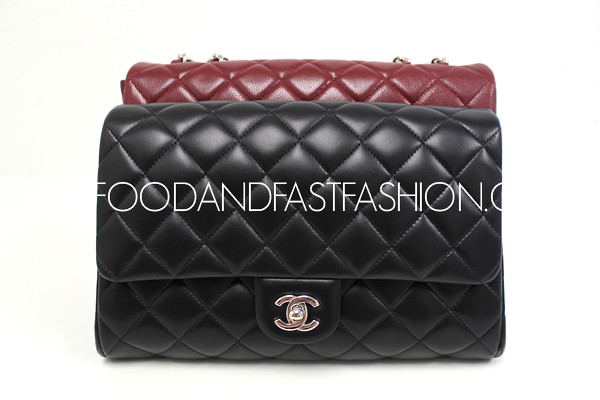 The jumbo flap is quite a bit deeper than the flap clutch. I think the flap clutch is intended to be an “evening and special events” type of bag. The jumbo, as pictured, is filled with tissue paper so it looks a bit wider than usual. 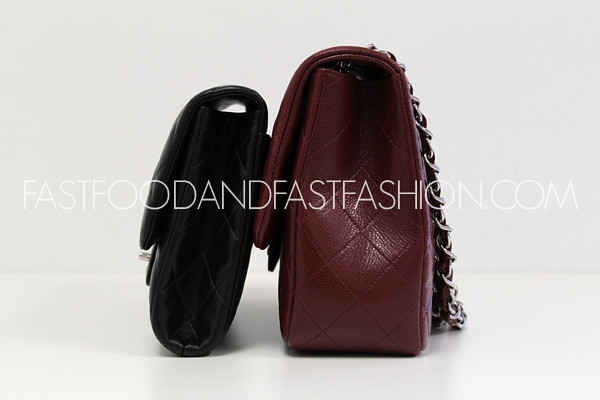 The flap clutch also can’t stand on its own but the classic flaps can because they have more structure.

Both the flap clutch and the jumbo flap have a back pocket, which I appreciate. 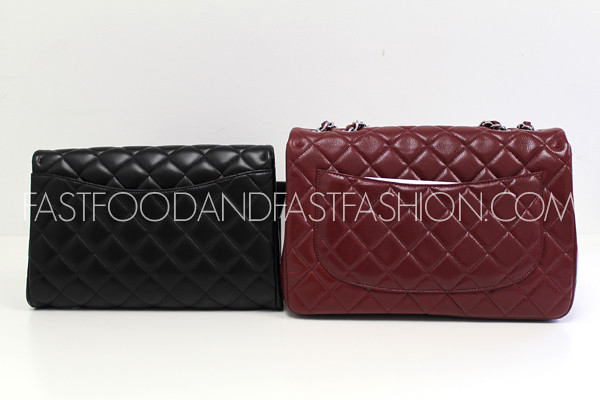 The most noticeable difference between the two is the chain. For a bag as big as the flap clutch, I am surprised that the chain is so thin. I would be afraid to stuff the bag lest the chains be unable to sustain the weight of the bag itself and the contents on the inside and break off. 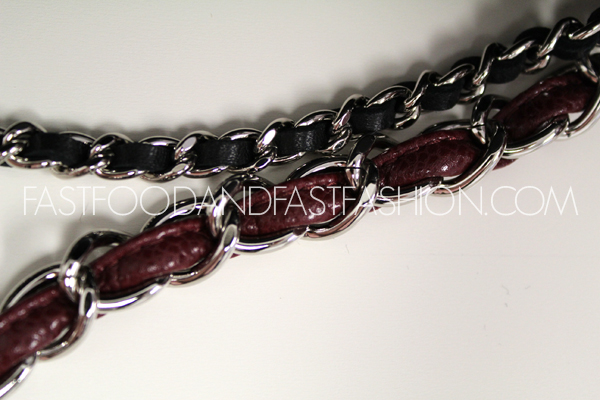 The chain is also substantially shorter. I wore it previously here and the chain can’t be adjusted. The chain, however, can be tucked neatly into the bag and be carried as a clutch. 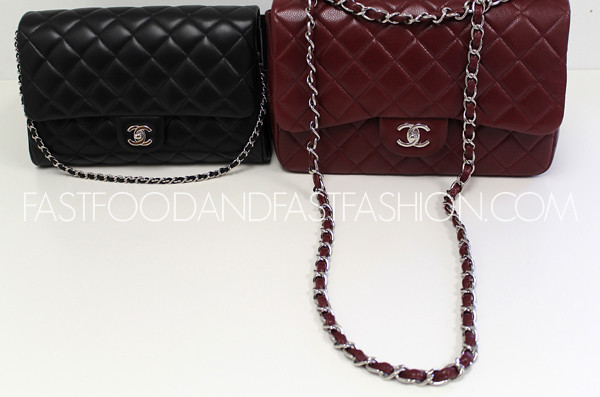 So, in conclusion…here are the pros and cons for people who don’t want to read my rambling in between.

Pros: For a bag that bears such a classic shape (and as the jumbo inches past $5000), it’s relatively good value*. The size is ideal for lunch dates and evening engagements.

Cons: The bag doesn’t hold as much as the appearance might suggest. The chain is also thin which could prove to be problematic if you are a heavy packer. The rings that hold the chain in place look a bit tacky.

I haven’t had a chance to pack the bag full so I don’t know what happens to the shape when it is overloaded. But I imagine it’s probably not a good idea to fill it to maximum capacity.

* good value is relative. I remember a time not so long ago when the jumbo wasn’t much more than $2100. Ah, the good ol’ days.