Bf and I grabbed lunch at 66 Lu’s Seafood (the literal chinese translation is the Taste of Sea). 66 Lu’s Seafood is probably one of nine (distinctively) Taiwanese restaurants in Flushing and is middle of the pack though I personally think the Taiwanese food selection in Flushing is really mediocre to begin with. There is a restaurant in the Boston Chinatown that is also called the Taste of Sea but I think they are unrelated. In any case, the Boston one is better in my opinion though neither stand out to me.

I don’t order dishes anymore (nothing special and sometimes pretty darn bland) and usually just order appetizers and the over-rice specials which are fairly priced and a nice sized portion. When I am really hungry I know I can count on 66 Lu’s Seafood for its insanely fast turnaround time. Within 3 minutes of sitting down the waitress took our orders and about a minute later boyfriend’s braised pork over rice special arrived. And my fried pork chop over rice followed about 3 minutes after. 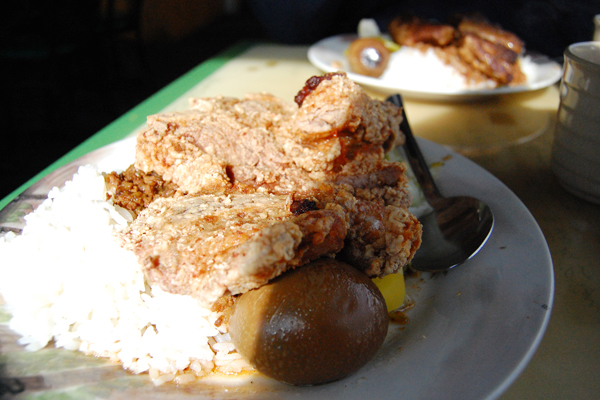 Side note: While 66 Lu’s Seafood is nothing too special…two doors down there is a Shanghainese restaurant called Nan Xiang Dumpling House that serves freshly made xiao long bao (steamed soup dumplings). Both bf and my older brother are big fans of xiao long bao and I think they both prefer Nan Xiang to Joe Shanghai (which is often recognized as the best xiao long bao in town) so that speaks volumes about the quality.

And I stopped by Economy Candy Market before heading to Soho (where I found H&M gold) and grabbed some candy for the walk.

The candy is cheap (for NYC standards anyway) and there is an array of choices. If you like retro candy and discontinued brands you should try your luck here. I didn’t take too many pictures because I was busy browsing for candy. Tons and tons of candy are jampacked into this tiny little shop so if you don’t look closely you’ll miss interesting novelty candy.

I do think their candy went up in price a tiny bit since the last time I was there but I can’t be sure.